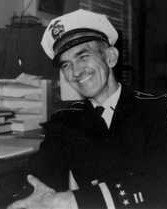 Lieutenant C.E. “Pat” Moore was shot and killed by one of two men after they robbed the First National Bank of $52,000.

Police arrived at the bank just as the suspects were driving away. As they pursued the vehicle one of the suspects jumped out five blocks away and fled on foot into a residential area. Police continued to pursue the vehicle for over an hour which ended when the vehicle crashed through a fence in downtown Omaha, Nebraska. The suspect fled the scene on foot and escaped.

Lieutenant Moore and another officer were searching the area where the first suspect fled when a citizen told them that she had seen a man with a bag run into a nearby home. It was discovered that the suspect had taken a 74-year-old woman hostage at 3113 5th Ave. As Lieutenant Moore entered the home to negotiate, the suspect shot him in the head and wounded the other officer.

The suspect ran from the home just as FBI agents were arriving on the scene. The agents shot the suspect several times as he ran toward the home of a retired dentist. The dentist saw the suspect coming and stepped out onto his porch and shot the suspect in the abdomen with his .22 caliber rifle. The suspect shot the dentist in the shoulder and then crashed through his glass front door where he collapsed.

The suspect, a former inmate at the Colorado State Penitentiary, died at the hospital. He was also wanted in connection with the beating death of a woman.

Lieutenant Moore was a 27-year veteran and was the first to head the department’s Youth Bureau.  Moore was also a talented artist painter.